And so, week 45 of the chronicle marks the departure of 45, a day spent, like many, watching all the festivities, the poignancy of the transition that I worried daily would not happen. I watched and bawled my eyes, releasing so much of the worries I've held for mostly four years of little hope, held so tightly since the virus began and doom seemed inevitable. That evening, I didn't need to keep checking CNN worrying about the latest worry obsession. The next morning, I didn't need to spend hours reading and gasping at the daily analysis of horrors.

Hope. I'd had moments, but they flitted, touching down for momentary hours rather than sticking around long enough to feel familiar. But on Wednesday, watching Kamala Harris take her oath from Sonia Sotomayer, hope built on hope. Every moment felt like a big breath out, a chance to believe that hate will have less room to govern, a possible stop to so carefully watching moments with fear.

Amanda Gorman brought on the tears big time, and I applauded loudly. I watched and rewatched the next day, her bright shining and bold words. I began my Intro Lit class with her video. Not as an exercise in analysis. Not as a dropped moment. But as an invitation into talking about the purpose/necessity of studying literature, of reading, of lingering in language. 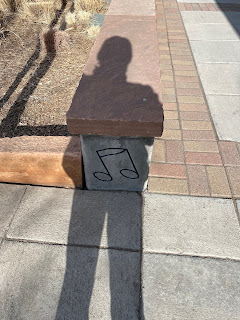 Now that the high of the past few days is wearing a bit, the reality of the virus is back to the center of my preoccupations. While a vaccine feels a bit more like a reality, it's still an unknowing number of months away for me. Nan received her second dose today. My parents received their first yesterday. It's in my orbit, yet not in grasping distance.

I wonder when it will feel OK to get on an airplane.

I still am struck every time I'm struck that life is absolute uncertainty.