2021. No dramatic changes. The neighborhood looks the same, my routine remains the same, and the news continues to broadcast crazy ass stuff from the reality tv guy who seems determined to make these remaining weeks filled with anxiety. But the same is not all terrible, because for me, that means my food obsession stays on repeat.

Nan and I aren't New Year's Eve type of gals. The forced party, the loud celebrations, the attempts at group closing out the past and ringing in some future has never been appealing. Sure, when I was 19 and playing in a band, landing a New Year's Eve gig on a long roster at CBGBs felt like a huge win, an arrival. But for most of my life, passing this particular evening on a plane back from vacation or being far from home doing nothing in particular is perfection.

This year, though, I didn't realize I needed something entirely different, some way to say goodbye to 2020 that brought a sense of connection. When my close friend and fellow foodie mentioned wanting to make Julia Child's boeuf bourguignon sometime in December, I said let's do that together, in our parallel universes. She chose New Year's Eve as the date, and so we got to work. Several weeks prior, she sent links to various renditions of the recipe, including one to watch Child cooking the deliciousness. Together we studied, sharing our thoughts a couple of weeks prior over a zoom, talking about the different steps, the wine we might use, our potential side dishes. We agreed on a start time for New Year's Eve cooking and a time we would gather over the computer screen and eat together.

If you had asked me months ago if I would ever eat together with someone over a computer screen, I'd have said HELL NO. Too strange a thought. Too different. I imagined it would heighten the separation, making me miss that sense of being together at a table. But last Thursday, we did just that, the four of us who have shared many meals together over the years of our friendship, staring into the computer screen, taking bites and talking. It didn't feel strange. It didn't feel like a weird substitute. Connection.

The hours and hours of prepping (studying, chatting, shopping) and cooking that day, helped me be present, totally immersed in the moment at hand rather than my distracted self flitting between thoughts, activities, and the doom of the news. I carefully boiled, peeled, cut little 1/8" inch cuts into pearl onions before browning them for the stew. I made a thickening paste of butter and flour for finishing the gravy. Each piece of meat was dried prior to sautéeing. A happy patience.
Last week also brought a first for me--paying to watch a concert virtually. Over these pandemic months, especially early on, many musicians would do free concerts from their homes. I enjoyed the randomness of Rufus Wainwright playing a daily tune in his bathrobe on instagram and the mostly daily tunes of Cheryl Wheeler on Facebook, always ending with an appearance by her dog. Over time, though, these faded away along with my desire to watch musicians on the computer screen. Yet, Patti Smith's birthday on December 30th, and her virtual celebration for $10 brought me back to the screen. This performance, though, unlike the others, was in a studio, with everyone except Patti (who was in a different room and not spitting), masked. The sound perfect (professionally mixed). The songs--all the faves. And one hour of me sitting on my couch, watching the concert on my television (thank you easy screencasting), singing along. Smiles.
And over the weekend, another first--we joined another couple over the computer to solve a mystery using a game we each purchased, spreading the clues on tables in front of us, solving together, even if separated by a screen. Again, not something I imagined myself doing, but after we achieved success (with a few computer hints), we discussed doing this again in the coming months. It's not really about filling up time, since I can stare into space for hours, but more about being active, present with something, together with each other and friends. 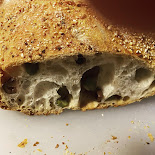 I'm not one for resolutions, pandemic or not. In these coming months, I know I will continue to cook, since the creative play is good for my mood, and I enjoy what I make (and fortunately so does Nan). Prior to the pandemic, I didn't do much baking, and certainly never baked bread (I only told Nan about all the years I used to make bread decades and decades ago), but with some sense of confinement and thus more time to explore, my bread making has improved, and I've been venturing into some new recipes. My first bread of 2021 is a new fave (olive and rosemary).
My mood still fluctuates, often due to news or frustration with not being able to do whatever I desire. Most days are not conducive to a delighted Id. I don't know what each next day will hold. I don't know when I'll get the vaccine. I don't know when I no longer will have to hold my breath, worrying about the ideals of this country. But I can say that 2021 will include food, surprise ways to feel connection, and hoping for hope on days when the sky feels far away.
Email Post
Labels: #breadmaking #coronavirus #covid19 #writing #stayhome