A Return to the Rocky Mountain Folks Fest 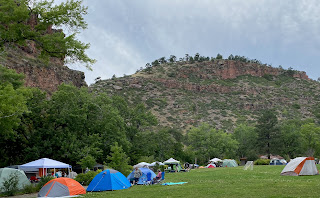 It's been three years since I set up camp in the grassy field at LaVern Johnson Park--my home during the Rocky Mountain Folks Fest. In 2019, I attended, unaware that my yearly August ritual would be interrupted by a virus that would intercept so much of my life. 2020 the festival cancelled. 2021 the festival emerged with limited numbers of attendance and an abbreviated schedule, and I had tickets, intention, and a last minute discomfort of attending being amidst many people while the virus surged. I did not attend. 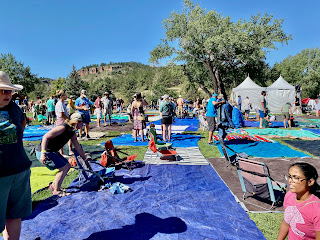 But this year, I had friends who'd traveled from Vancouver to hang out at the festival with me, I had my Folks Fest music buddy excited to discover new music together, and I felt ready to be in a mass of people, outdoors, knowing that I would have opportunity for space and the expanse of the sky above to breathe in. Rituals returned easily--bargaining for a number or better numbers in line in order to get a space we wanted, usually along or close to a path near the creek (for easy access and easy finding without crawling over many tarps), and as close to the stage to have a decent view. Chairs were staked out on the tarps for the early morning while I returned to camp to easily shower since the campground usually emptied by then, chill out some in shade, and then mosey over to the festival early afternoon to soak in the music. Morning coffee necessitated a quiet walk to The Stone Cup and food included dumplings from Sisters and a shared sandwich from St. Vrain Market. 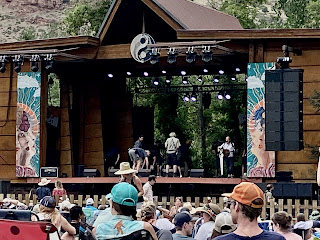 Because it is the music, along with being in the outdoors for four days and nights, that keeps me coming back each year. It's my happy place. My rejuvenation. My connecting to a place in me that is present and whole when I totally immerse into the sounds and rhythm. I grew up on the Clearwater Folk Festival--Pete Seeger, Arlo Guthrie, Don McLean; hanging with family and friends; hours in a chair listening to music and falling in love with the banjo and singer songwriters. I've attended numerous folk festivals over the years, but it is Lyons I return to since it's less than two hours from my house. And it is here that I always find myself discovering a new favorite musician, one whose tunes I will play over and over for days and months following my return home. Rhiannon Giddens, Martin Sexton, Ellis played on repeat over the past years, and this year, Sarah Jarosz shined on Friday night. While other acts drew deep smiles, her musical prowess, voice, and songs held me breathless. This song, "Blue Heron," is on repeat.

Being in a campground with strangers who become fellow travelers who bid you goodbye as you are packing up your sites saying "see you next year," makes me continue to want to return each year, to breathe in the beauty of the canyon and creek while the sun sets and the music lightens even the heaviest of hearts.
Email Post
Labels: #gratitude #music #rockymtnfolksfest