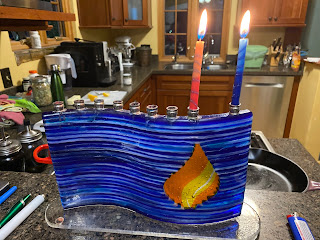 Rabbi--why don't you put your mask over your mouth and nose rather than wearing it as a neck warmer?

But I didn't say that. Just thought it. Mission was almost completed and I didn't want to leave without them.

On Thursday, mid-day, I began to prepare for Chanukah, taking the menorah down and rifling through a drawer for candles. When I pulled out two boxes, and began to count, I realized I only had enough to last for four nights. No problem I thought. Certainly I could order them from somewhere, pay for rush shipping, and have them brought to me. I tried multiple sites, scouring the web in a panic, only to be greeted by Out of Stock. I made phone calls to local party stores, craft stores, other places that usually stock them at this time of year. Still no luck.

Most years, I am not home every night, usually out connecting with friends for end of the semester commiseration celebrations and pre-holiday gatherings. But in these coronavirus days, I would be home all eight nights, able to light the menorah and bring some light into our world. I pondered whom I could text, whom Nan might text, but then, in my surfing wandering I saw that the nearby Chabad House was having a first night lighting of the electric menorah outside, and if you needed, they could supply you with candles. I dialed their number, and the rabbi told me that I could hope for a Chanukah miracle with my few candles lasting into eight nights, or I could come by and he could "hook me up." With my mask, some money for a donation, and determination, I headed for the pick up, feeling like a wayward Jew as I rang the bell.

I was invited inside and warmly greeted by the rabbi and his children. Not wanting to appear rude, I followed him into the nearby room and asked for candles. He went to a big table nearby and asked if I wanted dreidels, gelt, anything Chanukahish. I accepted some chocolate gelt, the candles, and readied myself to leave. As I walked towards the door, the recruitment pitch began, asking if I was affiliated with a congregation. I said no, promised to search them out on Facebook, and thanked the fresh air as I walked back to my car, no longer worried about lighting candles each night. 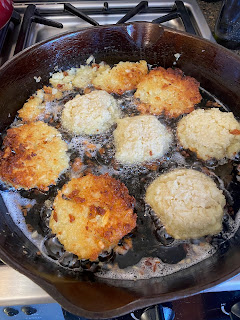 As the virus continues to rage on, as first vaccines are preparing for distribution, the latke fest that's been a tradition with two of my closest friends and their family, was not happening. So instead of procuring a typical 20 lb. bag of potatoes and peeling, squeezing, and frying with a team of four, I recruited Nan to help, something she hadn't needed to do for the last several years since I had many other willing and delightful helpers. With a rather light five lb. bag of potatoes, we peeled, shredded (thank you old old food processor that still works), mixed, and fried, for hours still, partaking without the usual crowd, but still happy for the deliciousness of latkes fresh from the pan. We didn't play dreidel and need to cheat the end by depositing all of our cheap chocolate gelt into the pile since we were bored, usually abandoning the game to the kids, who are now all teens still liking the tradition and the possibility of winning.
And while I missed what would have been typical if the year was different, and while I could have decided to be forlorn about what wasn't, I decided to invoke the mantra I've needed to call upon numerous times throughout these neverending coronavirus days. The mantra of different not necessarily good/bad. And leftover latkes and enough candles to last eight nights is a cause for celebration.