This past week marks the end of 15 weeks of mostly staying home, wearing a mask, watching headlines of numbers falling and rising, and most days having no idea when life like this will not be so much like life like this. This also marks the end of June, #pridemonth, a time that usually shines with celebration. 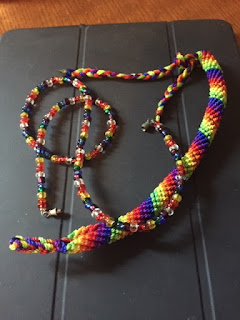 But not this year. Last weekend would have been Denver's pride march, and I noted its absence. Sure, I didn't have to moan about the hot weather and debate about whether we would really shlep downtown to hang in crowds. Despite the drawbacks, we joined friends, queers, allies, strangers and celebrated. It was tradition. A ritual. I'd dig through drawers to find my pride bracelets, the best pride tshirt, and choose cool footwear, especially when I purchased my Converse pride sneakers. We'd gather with friends on the steps of the Colorado State Capitol building, perched high enough to see over heads crowding to the sidewalk of Colfax, waiting for the parade that would sometimes last for more hours than we cared to watch. Nan and I would lean against each other, hold hands, kiss, never wondering if people were staring, never thinking about our safety.
Today, June 28th, is the 50th anniversary of the first pride march in NYC. I've been to several pride marches there over the years, but the most important NYC pride march I attended was in 2014, a year before the supreme court handed down its marriage equality decision. We traveled into Manhattan on a packed NJ Transit train, filled with people we labeled as decades younger than us, in groups of spirited laughter, heading to the same celebration. At the parade, we cheered loudly when Laverne Cox, that year's Grand Marshal, waved so fabulously. Watching the parade together that year brought more tears than usual (PFLAG always brought out my happy tears), knowing that a few days later, Nan and I would be married since it was legal in NY. I didn't care about being in a mass of people watching the parade. I cared about the freedom of holding Nan's hand, kissing her, free from worrying about ugly glances or nasty words. We were going to be spouse A and spouse B, officially, according to the city clerk's forms.

Missing pride this year, the pandemic year, meant missing that experience of looking around and seeing my people, feeling a shared sense of being, smiling so wide because this was our high holiday. This year, I didn't care to watch a virtual celebration. Sure, I like the floats and the pumped up beats, dykes on bikes revving the start of the parade, but I go to pride to celebrate freely, to have several hours where I don't think twice about being queer, a moment of not being othered. That could not happen virtually. Instead, I marked its loss for this year.
And so, as the days grow increasingly warmer, and I turn the calendar page shortly to July, I wait to see if Colorado will be hit as hard as many states are with their reopening and rising cases. Daily, headlines use words like apocalyptic, overwhelmed, scary. Lately, I wake before the birds, unnerved rather than rested from solid sleep. I meditate. Read. Take Whitman for a long walk in the quiet and coolness of the morning. I nap. And I hope that this time, next year, I am celebrating pride somewhere, in a crowd.
Email Post
Labels: #coronavirus #covid19 #writing #stayhome #pride2020