I skipped last week. Week 11 is invisible. I had no words. Nothing felt meaningful to write, share, meditate on as I watched the ugliness of racism continue to exact its toll. The sorrows of the world had built into one pile of heartbreak.
I've followed all the protests nationwide, so heartened by the bravery of youth and everyone taking to the streets, wishing I could be brave enough to go, but I am not, at least not now. With the pandemic, I have too much fear to be around so many people, in tight spaces of breathing and shouting, even if outdoors, even if most have masks. And so instead, I read black writers and listen: Jericho Brown's "To win justice for George Floyd, we need the rage that abolished slavery," Jenna Wortham's "A 'Glorious Poetic Rage'", and Roxane Gay's "Remember, No One is Coming to Save Us". I cry tears of hope when I see that protests are maybe slightly prying open a path to a long road of overdue change. Policemen arrested and charged for their evil racist use of force, schools ending their relationship with police forces, and police getting down on their knees, showing their unity to protestors rather than flinging force and death. It is a long long road in a nation that embraces hate, that is viewed as dangerous to journalists, that looks more like an authoritarian regime than democracy.
Amidst all of this, the virus still flings itself unseen. The US death toll is over 110,000. Cases are back on the rise in many states. A second wave is looming. And this is my constant reality. Worry. Even though it is now one week after a week that was not chronicled, the garden still blooms, and the sun shines blue in Denver in the 90 degree heat of a Sunday afternoon, an afternoon after a crazy storm last evening that brought branches flinging and trees toppling in a quick path of destruction. Just a couple of blocks away, a billboard thudded off its hinges. Life is uncertain. I can't predict a thing.
So I decided I needed a plan. A ray of happiness to fully kick into my summer. A vacation plan. This is mine. Today, I had my first of many hammock naps. May you have that safe space you can retreat to, a necessary escape in these pandemic times. 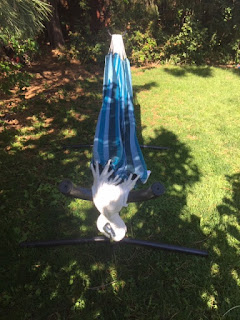