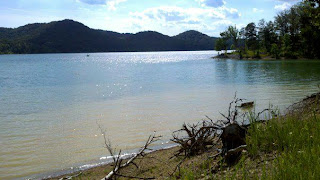 At the beginning of this summer, and truthfully, most summers, I begin with a mental list of goals. They include the mundane (clean out the closet, clean out the garage, organize the clutter of my home workspace) and the unfinished projects (convert old cassette tapes of my music to digital, transfer hours of oral history videos of my parents to digital and begin to organize into a Sundance worthy family documentary, and re-teach myself how to play banjo). They include putting lots of miles on my bicycle. They include prepping for the fall semester. They include writing and revising.

And now, as I am just two weeks away from returning to campus for the kick off into the fall semester, and facing the next two weeks with being on campus two days a week, I take stock and realize summer had a different plan. I have cycled a bit, but have not put the usual miles on my bike as past summers. While I might attribute this to the ridiculous heat of June and July, there is a different culprit. This same unexpected intrusion has also been the cause of why most of my goals are still in the same state as May--undone and often untouched.

Now, I'm not one for goals. You might actually refer to me as the goal avoider. Ask me to articulate a goal, and I shudder, afraid to set something for fear of disappointment. But, truthfully, there are goals set, even if only in my head. These goals, however, don't matter enough for me to prioritize them. Instead, summer is more of a journey, a path that I set with intentions, but a path that always has its own route. I just follow.

And this past summer that journey was one of travel. I travel most summers, but this summer felt differently. At first, I believed it must be because I will have spent about 30 days (roughly 1/3 of my time off) sleeping away from home. But when I started adding up previous summers, nights in other beds usually falls within that time frame, sometimes even exceeding that amount. This summer, though, I never felt like the giant expanse of summer, the time to have days faced with nothingness, the time to kick into a habit, because our trips never allowed for more than a few weeks at home. Those few weeks were usually filled with catching up with friends (something I had neglected most of the spring semester due to juggling too much), life maintenance (hair cuts, dog grooming, oil changes), and a bit of home care.

I am not complaining, though, because I would not trade the vastness and diversity of all the roads traveled for that expanse of summer nothingness. Life tends to deliver what I need rather than what I thought I needed, and for that, I am thankful. Instead of accomplishment, I needed experience--to immerse myself in different worlds; I needed to regenerate. From the unfamiliar horse farms of Lexington, Kentucky to the enchanted skies of New Mexico, I peered outside in order to get inside, understanding myself a bit more by listening to stories from strangers and walking on paths filled with plenty of sky.

During our most recent trip to New Mexico, I began to take stock and own what summer had bequeathed to me. Nan and I intended the trip to be a bit of a writing retreat, assuming that several hours a day would be spent writing and revising. I lugged my computer, several journals, and a folder with revisions and notes. I only touched the journal, briefly, one time. Instead of writing, I reflected on our recent trip to NYC, on revisiting my apartment and the memories that kicked into my consciousness (fodder for my memoiresque coming of age thing that I cannot call more than a thing because committing to it overwhelms me). I watched people and filed away character traits and potential plots. I soaked in hot springs and enjoyed hours of spacing out and napping in a hammock, so relaxed that I let little nuggets of writing ideas dissipate into the adobe sky.

Rather than assume I had not done all the writing intended (the summer goal that truly matters), I looked at what I had accomplished and realized I should stop chiding myself for not having done more. I revised an essay I have been working on for many years (and am still revising it), I revised a couple of micro-essays I have targeted as potential pieces to submit this fall, I blogged several times a month, and I began to draft material for my NYC memoiressayesque thing. Summer had given me the time to be, to breathe in the stillness that nature affords me. Summer had given me space to understand some of the meaning behind some of the essays I'd been revising. Summer had taught me that I cannot always plan. 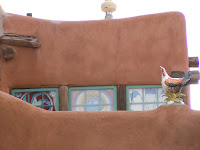 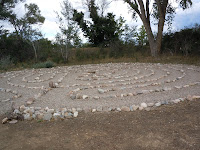 I finally surrendered to summer at the Mabel Dodge Luhan House in Taos. While wandering around a labyrinth outside its entrance, I realized just how ridiculously superstitious I am, determined that I could not simply jump over the boundaries of each path to get back to the beginning, because breaking out of the labyrinth's set paths meant that I would curse all my dreams (all writing erased and ceased by that simple action). Holding writing in my awareness, I walked inside and outside the former home of this 1920s salon artist/writer, noticing that everyone I passed was writing. Walking in the midst of a writing retreat, I didn't look at their practice as something other, but instead, I belonged, a practicing writer. Standing in the front of the building, looking up toward the DH Lawrence painted bathroom windows, I realized that I would not change a thing about this summer.