This week proved a bit challenging, teaching and working in remoteland. I find myself increasingly perplexed at trying to read students in a Zoom environment, especially when many don't have their video on. When I assign a short thing to work on for several minutes, I can't really gauge when they're finished, like I might in the classroom, noticing if they were fidgeting or had put their pen down. Fortunately, some do have their video on, so I use them as my guide. Sometimes I imagine I'm telling a joke, and I don't know if it's falling flat. I can't hear laughter when I am talking. It's not all dire, though. I get to see some faces and build relationships. Most students show up each week, eager to learn and be engaged. It's me who needs a new bag of teaching tricks. It's me who is constantly questioning if my approach is working. I am once again, some 20+ years later, a neurotic new teacher in the classroom.

That's uncomfortable. The self-doubt I'm not used to having. The hours of overpreparing for one hour of teaching because I can't do things on the fly in Zoomland. But I'm determined to figure this approach out. One class works fairly well, feeling like after four weeks, we have a rhythm established. I play a bit of a film soundtrack (it's an Intro to Film Art course) 10-15 minutes before class starts, without my video on, just putting brief messages into the chat, so that I can avoid that awkwardness of idle chit chat over the screen. I'm not that great at idle chit chat in person, so I really suck at it when staring into the computer. Students tune in early to hear what is playing. They make suggestions to use in future weeks. We have some community. I am hopeful that the other class is just slow to come together.

Some of my students have technical difficulties. They don't necessarily say something to me, but I figure when I am readmitting them to the Zoom room several times within the class period, it's because they've been kicked off the internet. I don't call it out. I get it. This week, I had five minutes or less to present my faculty report at the state board meeting for community colleges. For the first time, a board member asked me a question. As I was answering, I realized that my entire screen had blanked out the pictures of the board members; I had lost my internet connection. 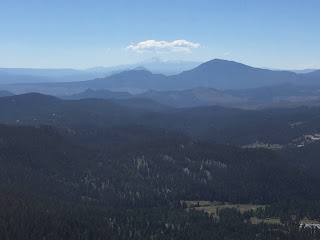 So today, I am thankful that I got out into the foothills and soaked up the smell of pine. For most of the summer, one of my hiking pal friends and I have been trying to do our usual few hikes. Each one was canceled by one of us for some unexpected reason. But today, the hiking goddesses smiled upon us. We returned to Staunton State Park for a long stroll into the woods and to gorgeous vistas of the mountains, sky finally clear from smoke, the blue of the soon to be autumn shining. We hiked for almost 13 miles, and for most of the day, I forgot about remoteland and all its challenges. I remembered to breathe in beauty and be grateful for my friend, for the time to escape and simply be. Remoteland will be waiting with its unpredictability, but for now, it is eclipsed by the views of today. For now, I am content to feel the tired in my feet and legs. For now, I am still in the park, turning corners and watching the aspens quake.
Email Post
Labels: #coronavirus #covid19 #writing #stayhome #hiking