Last week was the week to procure more masks, order my first box pickup from the local farmers' market (which swears it's opening in a few weeks--really South Pearl Street), and begin to think about summer, that anticipatory delight that gets me through the end of the spring semester. When Nan asked me what I was looking forward to, what would carry my days, I couldn't imagine. I went to a list of what wasn't going to happen--the outdoor concerts, the travel, lit fest (happening virtually but I am virtualout for a bit after the semester ends).

Unmoored might be this summer's theme, which I am sure will hold goodness amidst anxiety and uncertainty. Since I worry about not having a schedule, which usually is a fine thing but not in these pandemic times, I need distraction away from myself. I almost said yes to a one weekish gig being a virtual table leader for scoring AP English exams, something I enjoyed in person for more than a decade, but stopped doing a couple of years ago because of summer activities. For hours I pondered yes, no, yes, no, but after getting off a four hour Webex meeting with a slightly stiff back from too much sitting, I knew I could not spend a week tethered to a computer for five hour stints that I couldn't wander from. Future updates may show the paths I find once school is officially out.

Fortunately, Whitman and food still were my centerers, my steady that could always distract and keep me away from the constant check-in with the news. Whitman and I spent time lounging in the back, hanging out in the delights of early May. Our walks had no incidents, thankfully, and with the arrival of masks towards the end of the week, I rarely have to wear cloth napkins and rubberbands as we go our multiple miles through neighborhood streets.

Nan too helps keep me from falling too deep into an abyss. Today, we distracted ourselves from the pandemic rabbit holes we can go down and spent hours making homemade ravioli, something we only attempted one time before, many years ago, swearing to do it again, someday. After enjoying our creations for dinner, we pledged that it wouldn't be years again until we attempted this. The grill also got some use this week, and for the first time in weeks, we took out food from a local restaurant, even snagging some delicious margaritas to go.

And while there is good and a clear sky to smile at, there is still the hum in the background of the cases growing. On March 8th, I wrote a piece, for a writing group I was in, that focused on watching the number of US cases over the course of an hour scrolling on CNN.

is the figure tonight, which changed from the figure this afternoon, which jumped exponentially from the figure yesterday, the day before the day before, the day I didn’t remember that I started counting, watching, as if I could guard against the number. Scorekeeper in a one-sided game, marking only losses, untallied, totals to narrate a story in numbers, not names, unfaced, a new narrative for a viral age. Presumptive positive, a second, four new, 27, four minutes ago, 63 minutes ago, four hours ago. Travel related, close contacts. I don’t need an update to tell me about severe impacts, isolation, the way that days inside become a type of normal, a barometer measuring the pressure that I wish could predict the time of recovery, the length of stay. There are now 550. A situation in numbers.

As I sit here, less than two months later, the Worldometer says 1,187,768
That is why some evenings, I have to make imperfectly shaped yet delicious chocolate chunk cookies. 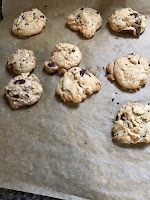