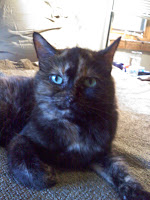 Loss keeps sneaking up on me, on us, since the whole household, or at least most of us, keep looking around in our own ways, waiting for her to come around the corner. I had Sappho for close to sixteen years, welcoming her in my home when she was around four weeks old--the runt of a litter from my friend's feral cat. I raised her with her brother, Jordan, who died from pancreatitis about three and a half years ago, along with other pets over the years. Sappho always preferred people over cats and dogs, opting to spend her time with me and Nan. Whenever company came over, Sappho would charm her way into somebody's lap, sweetness her ace. She proclaimed the upstairs of the house her territory, often waiting for us to come up in the evening so she could relax on our bed. My lap was her favorite spot, often stretching out and purring, a steady warmth and love constantly felt by both of us.

Over the years, Sappho struggled with various health issues and thus earned the title Warrior Princess. Whatever struggle faced her, she bravely fought it. More than eight years ago, Sappho began to have stomach issues, struggling with food and absorbing nutrients. Her original vet diagnosed her with Irritable Bowel Syndrome and thus began two years of a steroid regime on and off. The steroids would boost her back up, gaining some weight, not vomiting often. Eventually, the steroid regime proved less successful, and we were faced with perhaps having to put her on a lifetime regiment of pills. Around the same time, Nan and I had consulted a cat psychic to deal with cat behavioral issues in the household (yeah Sappho and others did not want to get along). When Nan asked the psychic about Sappho's health issues, she gave us the most logical advice--get a second opinion. That brought us to a new vet who immediately took Sappho off of steroids and treated her through nutrition.

Sappho seesawed in and out of health battles with her stomach, often linking the most troublesome times with a bad tooth. Over a number of years, Sappho had three of her four key teeth removed, and after each extraction, she rebounded, gaining weight, healthy and playful.

About two months ago, Sappho again plunged. Despite constantly desiring to eat, missing the litter box and giving us pee to clean up, she continued to be affectionate, always wishing to be near us, turning her head upside down to show her ultimate cuteness. After these final months of struggle, Sappho's body fully weakened and succumbed to cancer. We put her down before she got so weak that she had no quality of life.

And saying goodbye has been difficult. While we don't miss the cleaning up after her seven-eight times a day, we miss her. Dowan, the naughty boy cat who often picked on her, roams around the house looking for company, spending time following us around and hanging out with us upstairs on our bed in the evening. He constantly needs our attention, more needy now than before.

And we miss her habits and habits that were developed around her. Once Sappho began pissing outside the litter box, we stopped putting a bathmat on the floor while showering. Today, for the first time in months, I put one down and Sasha, as habit, returned to sprawl on it, feeling the warmth of the shower. The first evening without Sappho, we did not put out any cans of wet food for the other two cats, simply because nobody reminded us. Sappho always screamed for food, insistent on letting us know she was hungry. Without her here, the other two are content to simply munch on their bowl of dry food. In the morning, nobody is scratching at the door to be let in, usually the domain of Sappho, wanting us to get up and pay attention to her.

There are so many more things that linger in the hallway, in the corners of our memories, and in her sweetness that we keep hoping is just around the corner.
Email Post
Labels: cat